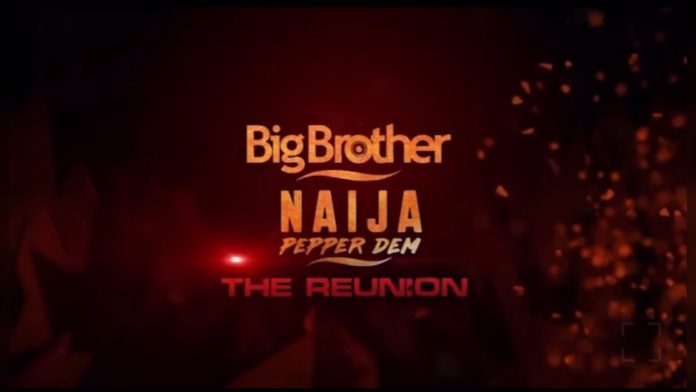 The BBNAIJA pepper dem reunion started tonight 1st of June on Africa magic Urban by 10:00pm and Africa magic family by 10:30pm both on Dstv and Gotv .

The reunion of the former BBNAIJA season 4 housemates will be interesting and fun as the beginning of the reunion was all about reviewing some activities like the happy moments, sad moments, the quarrelsome moments held in the big brother’s house

He also showed the welcoming of the new housemates, Venita , Elozonam , Enkay and Cindy after the eviction of the other two housemates

Few housemates were present in the reunion while some other housemates got involved through a live video because of the corona virus pandemic which they all have to keep social distancing and as well the covered their mouth with face mask .

Stay Tuned on the same channels and time as more are to be seen in the BBNAIJA pepper dem reunion .

Time for Today Nomination in BBNaija 2020. Watch the nomination show Live as it happens in the BBNaija Lockdown. The...
Read more
BBNaija 2020

Armed bandits have attacked a community in Adamawa State and left one resident dead.

Armed bandits have attacked a community in Adamawa State and left one resident dead. It was gathered Monday morning...
Read more

Adamawa government calls for the immediate closure of schools

Adamawa government calls for the immediate closure of schools The Adamawa State Government has directed the closure of all...
Read more

Singer Seyi shay,prays to God to provide her a man that prays and pays

Singer Seyi shay,prays to God to provide her a man that prays and pays Nigerian singer and songwriter Deborah...
Read more

The Presidential Task Force (PTF) on COVID-19, on Thursday, officially declared the second wave of the virus in Nigeria.
Read more

Minister of Health,Ehanire reveals when Nigerians will start getting COVID-19 vaccine

My boyfriend won N2 million from betting and Only gave me 20k instead of N1 million.

The young lady revealed that her boyfriend recently won the sum of ₦2 million from betting. The lady went on to express...
Read more
Load more
© Kings Naija | All rights reserved