Cynthia Morgan speaks on not having issues with Jude Okoye but her former manager, Joy Tango 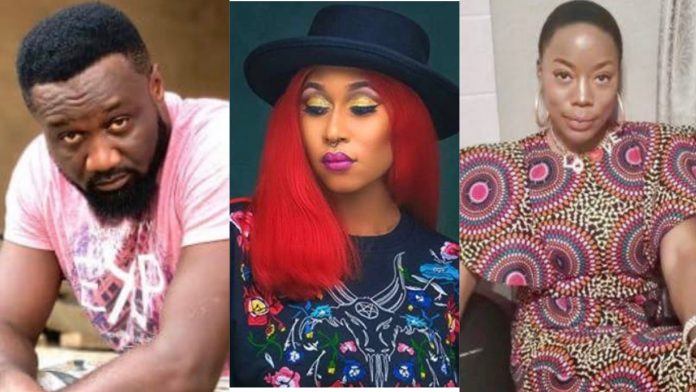 Cynthia Morgan speaks on not having issues with Jude Okoye but her former manager, Joy Tango

Recall that Cynthia Morgan  accused Jude Okoye of holding on to her Instagram accounts, VEVO account, and also made her to stop using her name Cynthia Morgan after the contract ended

The dancehall singer Cynthia Morgan appears to have had a change of mind saying that she doesn’t have a problem with Jude Okoye, but with her former manager, Joy Tango

Cynthia Morgan made these disclosure on an Instagram live chat with Sandra. She says, Joy Tongo was the problem all along and not Jude Okoye.She also said that Joy was the middle man but she never did her job well. And she will never make peace with Joy Tango but with Jude Okoye because she had no issue with Jude Okoye

Recall that Jude Okoye who was allegedly accused  by Cynthia Morgan of destroying her career  said he will be sharing the contract he had with the dancehall singer Cynthia Morgan online.

I have forgiven my ex-husband says Tonto Dikeh The Nigerian actress, Tonto Dikeh  in an interview with journalist, Dele Momodu...
Read more
CELEB

Ex BBNAIJA housemate, Uriel needs an advise on owning a cat in Nigeria-Photos

Time for Today Nomination in BBNaija 2020. Watch the nomination show Live as it happens in the BBNaija Lockdown. The...
Read more

The two housemates evicted in the 2nd BBNaija lockdown eviction

Housemates up for 2nd eviction in BBNaija lockdown house (video)