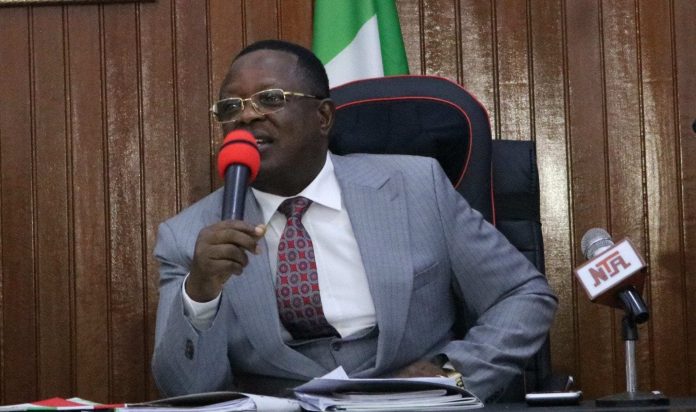 Governor, David Umahi of Ebonyi State, has banned correspondents of The Sun Newspaper, Chijioke Agwu, and Vanguard Newspaper, Peter Okutu, from entering the Government House or any government facility in the state for life.

Governor Umahi, on Wednesday in a live broadcast, declared that Ebonyi people were very angry with the press and may “unleash mayhem” on them.

The Governor expressed his displeasure with the Nigeria Union of Journalists (NUJ), for failing to discipline their members appropriately.

Umahi earlier ordered the arrest of Agwu over a report he did on the ‘Lassa Fever’ outbreak in the state.

Within 72 hours, Okutu was arrested on the orders of Ohaukwu LGA Chairman, Clement Odah, over a report on the alleged military invasion of the Umuogodoakpu-Ngbo community in the council area.

Agwu and Okutu were later released after condemnations.

“I want to say that I am very displeased with the president and leadership of the Nigeria Union of Journalists and I am going to seize their allowances for two months because they have failed to discipline their members.

“Ebonyi State is no longer a dumping ground. Only the other day, Chijioke Agwu (referring to The Sun Correspondent) wrote that Lassa Fever is killing Ebonyi people in droves and (a) few days back, Mr. Peter Okutu of Vanguard did his own.

“Okutu is fond of degrading Ebonyi State, and I don’t know why my officials have allowed him to continue to do that, because he is not from Ebonyi State. I want to ban him for life with Chijioke Agwu. I don’t want to see them anywhere in any Government facility.

“We are not begging you to give us good reports, because the only person that gives good or bad reports is God. We are all accountable to him. If you think that Ebonyi State is a dumping ground, try it again.

“If you think you have the pen, we have the koboko. Let’s leave the court alone. Ebonyi people are very angry with the press and let me warn that I won’t be able to control them or know when they unleash mayhem on you, if you continue to write to create panic in the state.

“I want you to write it that way, that I said, press in Ebonyi is trying to create another COVID that is more dangerous and that is to create panic in our people. The other one wrote that cholera has killed 20 people in Ohaukwu. If you try it again, I may not know when Ebonyians may react. This is important for the NUJ to know.

Organisations have condemned the threats and arrests of the journalist.

The International Press Centre (IPC) called the targeting of pressmen as executive lawlessness.

Its Executive Director, Lanre Arogundade, said: “Arresting a journalist and getting him detained over a story is not an acceptable means of seeking such redress and the act of Mr Odah is unacceptable.

“Coming after a similar arrest and detention of The Sun newspaper reporter, Agwu Chijioke, on the orders of the State Governor, David Umahi, who also featured prominently in the ordeal of Mr. Okutu, IPC is worried that the state government is fast becoming notorious for its serial violation of the rights of journalists.”

Meanwhile, the Socio-Economic Rights and Accountability Project (SERAP) has issued an ultimatum to Umahi.

Its Deputy Director, Kolawole Oluwadare, called the ban on the journalists a blatant violation of the right to freedom of expression and media freedom as guaranteed by the Nigerian Constitution.

“We will pursue appropriate legal action nationally and internationally against Ebonyi State authorities if this illegality is not reversed within 48 hours of the publication of this statement”, the body warned.

They are routinely arrested, attacked and threatened by government officials, politicians, powerful citizens and their loyalists.

Their leader, Kingsley Iweka, ordered over a dozen of his entourage to pounce on the duo while they were monitoring the level of compliance lockdown order at Otiotio Street in Uvwie Local Government Area in Ebonyi State.