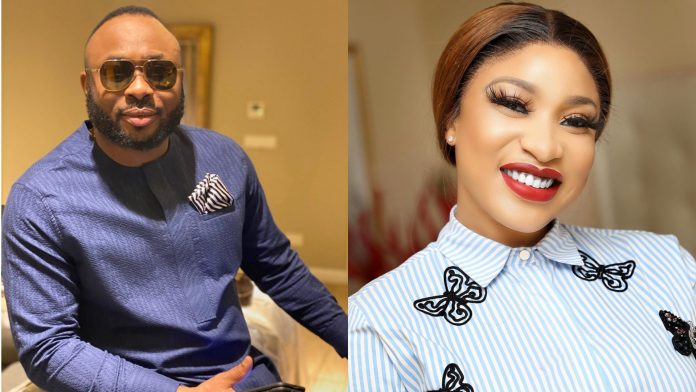 I have forgiven my ex-husband says Tonto Dikeh

The Nigerian actress, Tonto Dikeh  in an interview with journalist, Dele Momodu on Sunday, 26, 2020, on the importance of forgiveness, reviewed that she has finally forgiven her ex-husband, Olakunle Churchill , for the sake of their child, King Andre.

The journalist asked Tonto Dikeh about her attitude to forgiveness and vindictiveness, Tonto replied by saying “A man I love and respect always, talked to me about forgiveness and I have come to realize that forgiveness is not about the next person.

I know that forgivessness is not about the next person but the explanation I got recently really wowed me.

Forgiveness is a whole lot and I only just realized that the bible says that if we do not forgive, God cannot forgive us. All these things are in the bible but it never really made an impact to me until someone really explained it.

So today I would tell you that for me it comes really easy. I forgive alot but I just don’t like to get provoked by the things that you do after it. I think forgiveness is an essential for ones growth”.

Asked if there is anyone she would never forgive in her life, she said;

As of today, there is nobody I hold a grudge on but there are people who I have forgiven but I would never have a relationship with again”.

Asked if she has forgiven her son’s father, she responded;

“Oh yes, especially him. I forgive him and wish him the best, for my son’s sake. I do. Why not?”

In the year 2019, Tonto Dikeh shared videos of her failed marriage with her ex spouse Olakunle Churchill, dragged him over his infidelity, low sexual performance, involving in internet fraud and also a ritualist

Olakunle Churchill on other hand, announced that he is suing Tonto Dikeh his ex wife for the sum of 500Million for general damages incurred by him due to the malicious and false publications

How to Watch the Nigeria Idol 2021 GOtv, DStv, YouTube, Streams

How to Watch the Nigeria Idol 2021 GOtv, DStv, YouTube, Streams. African Idol fans got a wide range of...
Read more