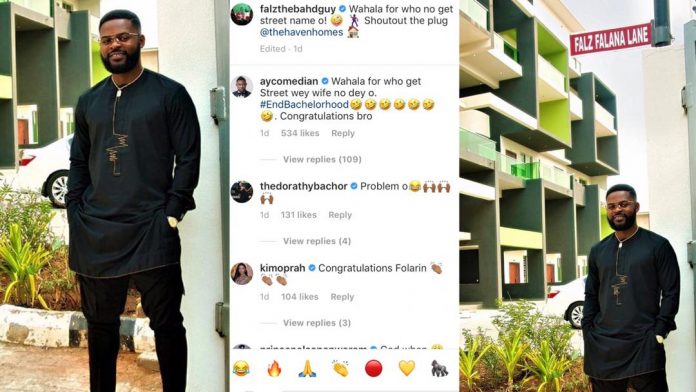 Jubilations as Falz gets honored with street named after him in Lagos (Photo).

Nigerian rapper, Folarin Falana popularly known as Falz has taken to his Instagram account to show his excitement after a street in Lagos state got named after him in new post.

The rapper revealed this on Friday, November 27, on his verified Instagram account. He shared a photo of him standing under the street sign with ‘FALZ FALANA LANE’ boldly written on it.

The “Bop Daddy” crooner jokingly jested those who doesn’t have a street named after them. He captioned the photo,

“Wahala for who no get street name o! 🤪 🕺🏿 Shoutout the plug @thehavenhomes 🏠”

His fans and colleagues have showered congratulatory messages to hail him, others also noted that he deserved the recognition.

In other news, Nigerian singer and actor, Falz, has taken a swipe at Nigeria’s President Muhammadu Buhari over congratulatory message he sent to US President-elect, Joe Biden.

In the statement sent, Buhari had stated that democracy entails respect for the will of the people.

Taking to his official Twitter page on Saturday, the message read in part:

“Respect for the will of the people is the very reason why democracy remains the best form of government, despite its limitations from one polity to another, and from one society to another.”

“Who typed this? Because you clearly know nothing about respecting the will of the people”

How to Resolve Invalid Channel on GOtv in 2021/2022. Here is a quick solution to your GOtv invalid channel...
Read more

Cause of WhatsApp, Facebook, Instagram down in Nigeria and other Countries. Unexpected shutdown on social media in Nigeria and...
Read more