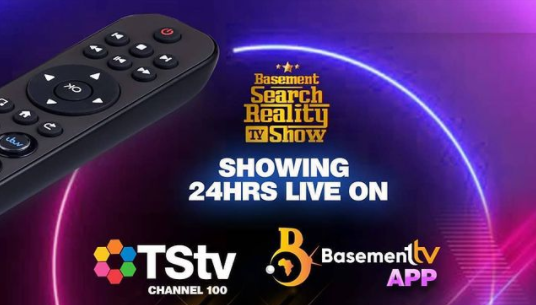 How to Watch Basement Reality Show 2021 Season 1 on TStv, Online.

Basement Africa reality TV show 2021 will be showing online TStv. Here are the procedures to watch the 2021 reality TV show as the housemates trill you with mouthwatering entertainment.

The show is organized by Basement Entertainment and it is only broadcasted on TStv and Basement App only, but there are ways to also stream online and catch some clips on YouTube and Social media pages (Instagram, Facebook, and Twitter).

Ways to View Basement Reality on TV, App and Online

We know you’re looking forward to meeting the new Housemates of the 2021 Basement reality show and you want to catch every second of the action from the house. There are so many ways to keep up with and join the most exciting conversation with Basement Season 1, every day, 24/7 in the whole duration of the reality TV show.

How to Watch Basement show on TStv Channel

The live show will be live after the premiere on TStv channel 100, so get connected and stay glue to your TV screen to catch all the excitement from the housemates.

How to Watch Basement show on App

You can watch live streaming of the Basement App on your mobile phones from anywhere in the world by downloading the App on Playstore and Apple store.

Can I Watch Basement Reality Show on GOtv?

NO, the show won’t be showing on GOtv, you can only watch it on TStv channel 100 and the basement TV App.

Can I Watch Basement Reality Show on DStv?

NO, the show won’t be showing on DStv, you can only watch it on TStv channel 100 and the basement TV App.

The show is expected to run for a period of 42 days with task and challenges as housemates compete to win the grand prize of 25,000,000.